After a couple of days in St Kitts, we were ready for a change of scenery. We filled our water tanks, took a last-minute pre-departure shower (Thomas called it his best decision ever) and we were off to.. where exactly? North, for sure, but Saba or the British Virgin Islands?

We were not sure if we would be able to stop in Saba for the night: there was still a weird swell and the anchorage in Saba is very unprotected. Its also very deep with only a few moorings, which are often taken. Once on a mooring, it is often impossible to get to land with a dinghy through the waves. Taken all this in consideration, we had to prepare ourselves and the boat for the scenario that we would have to skip Saba and keep sailing towards the BVI’s through the night.

The winds were light, we were late (was it because of that last-minute shower?) and didn’t make it to Saba until it was already dark. We had gotten really lazy with sailing and didn’t make the best decisions. Despite the light winds we only used our headsail, and with our dirty hull which desperately needed to be cleaned we only did 3 knots. Since mooring at night isn’t an option for us, we had to skip Saba and continue to the BVI’s. We had only ourselves to blame.. It was a very relaxed sail though. Nice and slow.

Wind on the horizon?

Dolphins! Can’t get enough of them!

We were so slow that the 120 mile sail took us almost 1,5 day, with an average of just over 3,5 knots. The last part of the sail we really had to hurry to make it to the anchorage before dark, so we motored the last hour. We were both a bit disappointed with our own laziness and I promise we have gotten more sporty sailors since then.

We cleared in at Spanish Town at Virgin Gorda. The unfriendly immigration officer made us fill out several forms in fivefold. Four of the five copies disappeared on enormous piles of paper behind his desk. The piles were so massive they didn’t leave much space for the officer, no wonder he was grumpy. With cramps in our fingers we left the office a sweaty hour later, relieved to have it over with. We walked around town and were struck by the enormous damage the hurricanes have done on the island. The marina looked like a graveyard, all the boats were severely damaged. There were many boats upside down and big piles of wrecks on the waterside. Most of the buildings were damaged and deserted.

We took Scehawk around the corner to Gorda Sound, a big and sheltered bay on the north of Virgin Gorda. This used to be a very busy anchorage, but there weren’t many boats there. There had been a few resorts and hotels, but everything has just vanished. Our guidebook seemed to describe another bay, so much has changed in just a year. We dropped anchor and enjoyed a swim and a paddle in these calm and unreal surroundings. 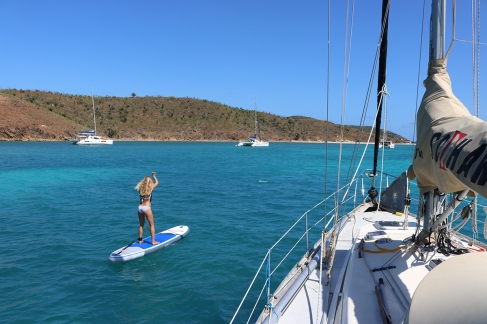 We didn’t provision very well in St Kitts, which we were regretting by this point. We were running low on just about everything (except tea and ketchup, of which we have enough for the rest of our lives because of some optimistic Atlantic crossing provisioning). So we went on a dinghy mission around the bay to hunt down some cheese, veggies and beer. Our boat neighbours pointed us in the right direction, and we were invited for some sundowners on their boat that evening. We made friends and found food!

Mona and Matthieu, our boat neighbours, invited us for a deep-water snorkel the next day. We explored two pillars of reef in what seemed to be the middle of the ocean, with a strong current and bad visibility. After half an hour in the water we gave up, which I was totally fine with as I am still getting used to swimming in deep open water..

Searching for the invisible coral pillars

Thomas spent the rest of the day cleaning the hull and teamed up with a big fish. When he was working one side, the fish took the other. After a while they swapped sides. The boat had grown a beard in the dirty water of Guadeloupe and Martinique, where we both spent a week in the dirty marina anchorage. Cleaning the hull takes stamina, as you have to dive down all the time to get to the keel and deeper parts of the boat as well. But it payed off: we gained more than a knot of speed! 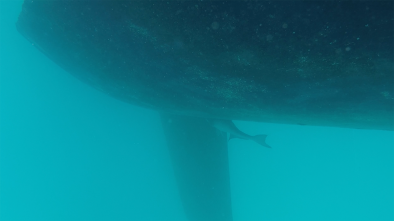 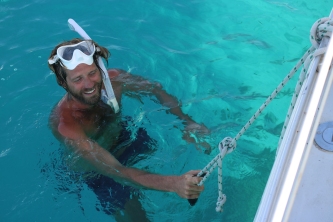