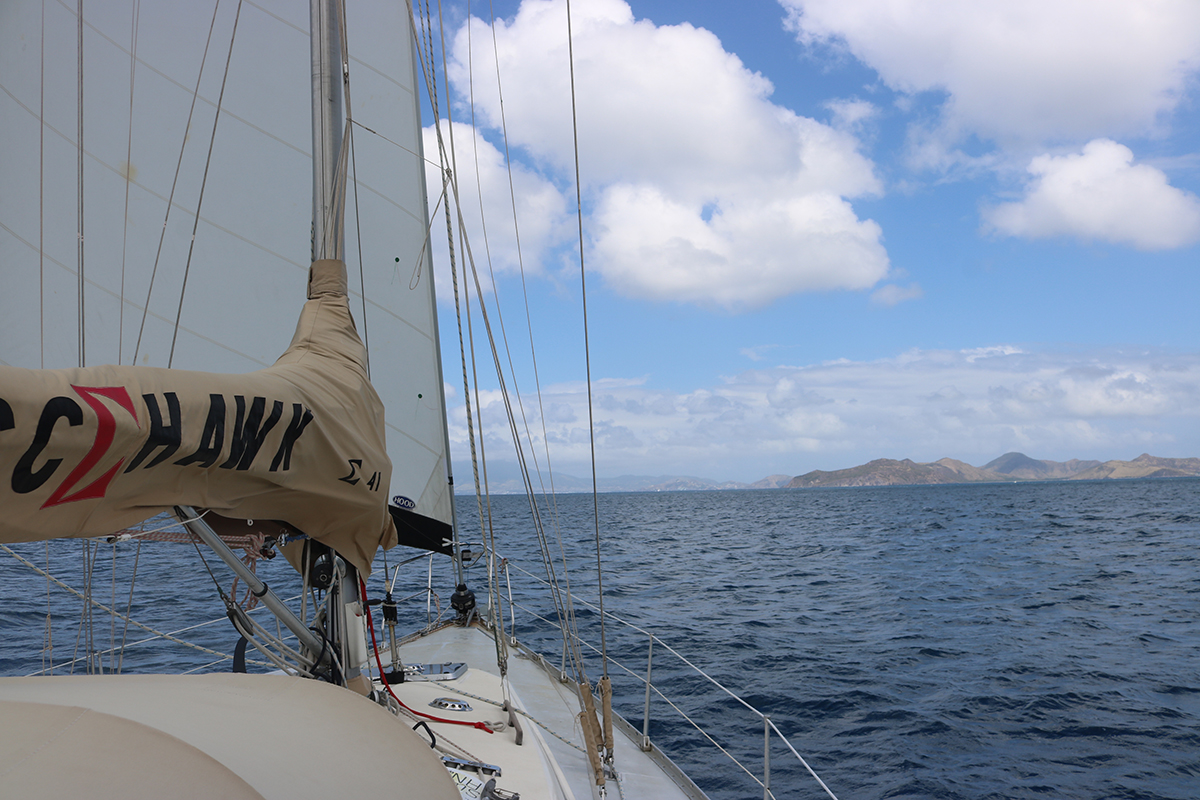 Super relieved that our engine was controllable from the cockpit again, we set sail for St Kitts. Typing ‘setting sail to St Kitts’ almost takes longer than the actual sail, as it is right next to each other. We anchored in a picturesque little bay called ‘White House Bay’, which we happily found out was the place to be. There was a restaurant/bar ashore, made from reused materials. It was a sight for sore eyes. 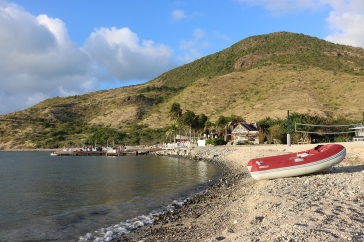 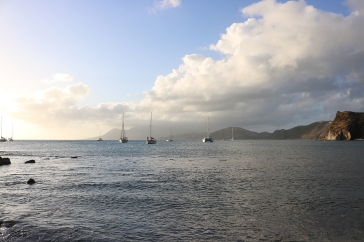 We spent the afternoon at the beach and walked over to the bar for sundowners. Am I making this sound like a holiday? It sure felt like it! We were invited by an American cruiser couple to join them at their table. ‘You must be cruisers because you’re also not wearing shoes!’ Beth and Mike have been living on their boat for several decades, moving from one Caribbean island to the next every few years. Mike is a professor at the Medical University and told us all about St Kitts, where they have been living for a few years now. They invited us to their boat afterwards for another drink and told us that they are selling their boat and moving back to Colorado for their retirement. What a life! They are the real deal, living on a boat for so long.. After almost a year we are already longing for a stand-up shower and a stove that fits more than 1,5 pot!

The openness and hospitality of the cruisers community keeps surprising us on this side of the ocean. In the Med, we didn’t meet a fraction of the people we meet here. People will just come up to our boat to say hi, start talking to us on the street or wave us over as we are underway in our dinghy. We even had some people recognise us from our Instagram account! I guess we are getting better at it ourselves as well: going over to boats which are following the same route, or with a dutch or german flag, or just young cruisers in general. We’re also not that pre-occupied which we were in the Med, so we have more time to spare and actually notice the other cruisers around us.

The island of St Kitts was occupied mainly by plantations during the colonial times. Since the abolition of slavery, the plantations have been abandoned. The main income of the island today is tourism, which we noticed by the four cruise ships docked on this tiny island. Its almost nauseating, all these tens of thousands tourists being loaded onto the dock every single day. There is an artificial town of tax-free shops right at the cruise pier. The same tax-free shops like on every island. How much jewellery and shoes could one person need, right? How do all these stores survive? At five in the afternoon, all the tourists will be back on their boat and you can finally see what the island looks like for the inhabitants.

The first and brand new traffic lights of the island

We did have a great time in the marina in St Kitts, despite the thousands of tourists. We got a tour around the island, which is tiny, and saw for ourselves how much potential agricultural land is in disuse. The politicians are selling off big parts of the coast to hotel developers, which our taxi driver assured us is money laundering. She was so upset that the island has to import sugar from Guatemala now: ‘Its a disgrace!’. Young people are all leaving the country, all of her nine kids have traded the island for Europe and the USA. The only other thing, besides tourism, keeping the island from economical decline are the handful of American universities. There is a school for nurses, a medical school and a veterinarian school which attracts students from all over the world.

Black point, where lava flowed into the ocean after a volcanic eruption 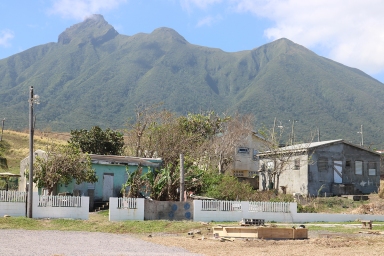 While in St Kitts, we stayed in the town harbour which was surprisingly cheap. But also crawling with rats.. It wasn’t possible to stay on anchor, the swell was still very high. Before we could tie up in the harbour, we sat at anchor for a few hours and got seasick almost immediately. We had to wait so long that we took our dinghy into the marina to take a look what was the hold-up.

The whole morning, a surprisingly active harbour employee had been answering the VHF, but after noon we didn’t get any replies. We waited for two hours and right before we would have been feeding our lunch to the fish we jumped in the dinghy and zigzagged across the huge cruise ships towards the harbour (port police was NOT amused). In the harbour office, we found the guy who was taking the afternoon shift was stoned out of his mind. He was in the middle of a movie and could not be bothered by answering the VHF, but agreed that we would come in and take a spot at the dock. But please don’t come in and pay today.

On the way back, passing under the bows of the cruise ships, the port police was NOT AMUSED again. We had to take the boat along the cruise ships a third time, and this time the port police raced after us, with blaring sirenes while shouting and gesturing: ‘WAIT! GO! FULL GAS! FULL GAS! GO! STOP!’. It was all so confusing we let them do their shouting and took a big detour around the departing cruise ships. We made it in one piece, and were glad to be out of the big waves and safely tied up to the dock. And the best thing: they had amazing showers!

We stayed in the marina for two days, reprovisioned and watched the cruise ship tourists poor in and out of the city every day like tidal streams. We had enough of it quite soon, set sail to our next destination: the BVI’s!